skip to main | skip to sidebar

My New Story, "Tamales for Sale," Appears in Latest AHMM 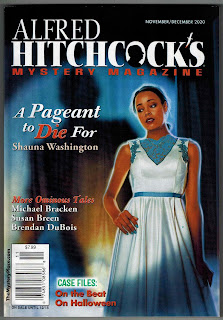 I am still alive -- but I've nearly turned invisible. I've even given up writing my Goodreads reviews (see the widget to the right), though I hope to return to it at some point.

The truth is, I've had little writing news to share. I have been working on a novel -- and then occasionally taking a break to write a story. Speaking of which, I have a new story, "Tamales for Sale," in Alfred Hitchcock's Mystery Magazine -- the November/December 2020 double issue.

The story centers on a family of undocumented Mexican immigrants in the U.S. -- a grandmother and her adult granddaughter and
grandson -- who cook and sell tamales. The grandmother is a curandera; originally I toyed with the idea of calling the story, "The Curandera's Tamales."

I wrote the story in 2015, which now seems like a totally different era. I don't know if I would've had the nerve to write it today. I aim to treat my characters with respect -- and to render them with detail. I also try to meaningfully capture the challenges the characters face. At the same time, I am not Mexican and have not personally lived with the fear and pressures experienced by the characters. 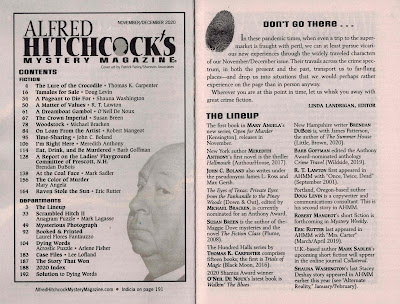 In 2010, I had a story, "The Docile Shark" in Ellery Queen's Mystery Magazine that featured a Mexican tour and snorkeling guide, Felipe. The story turns, I hope, on the pathos of Felipe's experience.

Retrospectively, I find myself muddling through these cultural questions about representation and appropriation. I welcome comments and messages to help me along.

We Wish to Inform You That Tomorrow We Will Be Killed With Our Families : Stories from Rwanda
by Philip Gourevitch
This is a remarkable book about an unspeakable event. If I could tell the President to read one book, this might be it.
tagged: war

Doug Levin
I am a professional writer living in Portland, Oregon. I earn my keep writing a wide range of corporate materials. I also write fiction, primarily crime fiction. My work has appeared in several magazines and anthologies. I no longer regularly update this blog, but for many years, I wrote here about fiction and film -- mostly centered on crime, but also war. (I've given up on war reading for the most part.) I am a lapsed member of the National Book Critics Circle and an active member of the Mystery Writers of America. I am a former academic, once gave a lift to a soon-to-be Nobel Prize-winning author, and have met a couple astronauts. Some time ago, I received my Ph.D. in English from Yale University.